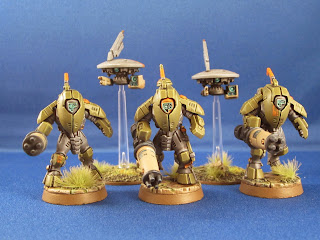 The MPB was actually intended to be a Tau project blog when it was launched. I was riding high on all the great work I had seen at ATT and wanted to be part of the conversation. I have no idea how many painters and players that site has inspired, but it is one my favorites of all time. So way back, I started this blog painiting models for what I was calling my Ka'Pow Tau. See what I did there?...

Sadly, it is damn nigh impossible for me to stay focussed on any one thing, and it seems as if it is getting worse. So, after not doing anything with Tau for years, it only seems fitting that it would come back full circle to this post. Let me explain. No, let me sum up. I was having fun with Eldar, minding my own business, then I played against Tau. And suddenly I started thinking back to my Tau. Next thing I know, I am borrowing a friend's army, and then looking through my shed wondering what I even have anymore that is Tau. And from there it only gets worse. Tale as old as time.

So what I had started, at some point years ago, was a Stealthsuit team. It stood to reason, as I friggin' love these models. They had been based in a color I didn't have anymore (Knarloc Green) so I had to redo quite a lot of them. At some point during this process, I decided if I were going to realize another Tau army, I would want it to be three distinct color schemes, though they would share at least one color each. That is why the drones are a different color. 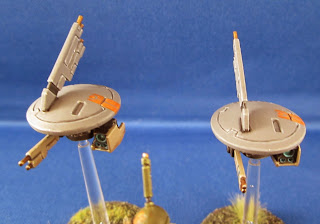 My thinking is:
Suits= Green 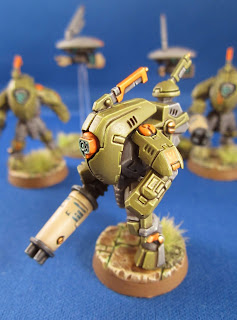 As an aside, I was at a complete loss with what do with the drones, so my default is to make it glow. I like the idea, but I need to work on the execution. 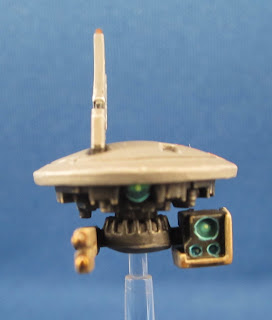 In all, it was fun to revisit the color scheme and the models. Kinda of like riding a bike. I have no idea where the Ka'Pow Tau are now. But at least a little part of them is alive and well in miniatures case at home.

What do you guys think?

Thanks for reading,
T